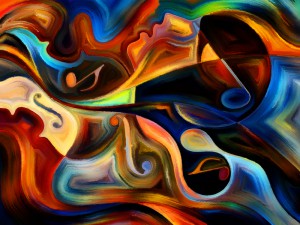 This article is a prelude to a workshop I'll be giving at Life Force Arts Center, 1609 W Belmont, next Sunday the 24th from 1-4pm. Details and registration here.

Please see Part 1 for the natal signatures that speak to creative ability along with some famous chart examples.

Certain transits and progressions can indicate when creative inspiration and opportunity for cultivation and expression is at its peak. For day-to-day and month-to-month analysis, look to the Moon for cues on when you're likely to be most "tapped in" to your creative muse. When the Moon transits your 5th and 12th houses, or makes major aspects to your Sun, Neptune, Venus, or your 5th and 12th rulers, can be high times for creative practice and cultivation. When Venus trines and sextiles those same points you may feel a greater affinity and sensitivity to those energies and you might want to cozy up to the planet or house in question and explore its mysteries. Jupiter transits will expand those points and fuel your creative drive and output when transiting the 5th and 12 houses. Uranus and Pluto transits to your natal planets and angles, which are very long term, can actually awaken latent talents you didn't even know you had.

This article assumes a basic level of astrological knowledge. If you don't have your natal chart but you know your birth time, you can cast a free chart at astro.com.

The progressed Moon will indicate where your emotional focus is at any given point of your life. It takes roughly two and a half years to progress through a house, and roughly two months to progress through an aspect to a planet. That's about a two month period when you may be more easily in touch with the creative nature of whatever planet it's aspecting. When your progressed Moon trines your natal Sun, for example, you may find it easier to produce art that expresses emotion and memories. When it squares your Mars, you may be feeling aggression that can be converted into a powerfully primal art form.

Progressions from Venus and Mars can indicate receptivity and drive, respectively, relative to the aspected planet. If your progressed Venus reaches a trine to natal Neptune, that can be a very fruitful time for creating beauty through abstract form, such as writing gentle music or poetry, or painting delicate impressionist landscapes. Progressed Mars trine your Sun lends an inexhaustible store of fuel to your creative power.

Many artists have described the experience of creating art that wasn't originated by themselves. It's as if they open themselves to a creative muse that uses the artist's mind and body to create on the muse's behalf. The great German composer Johannes Brahms spoke of "the Infinite Source of Wisdom and Power," a spiritual energy that he felt expressed through him when he composed. Beethoven believed God made him deaf so he could clearly hear and transcribe God's music, which he claimed flowed into him as a continuous stream. Joni Mitchell described songwriting as being "in touch with the miraculous." When an artist, honed by discipline and practice, surrenders to this higher creative will, what emerges can be as surprising to the artist as to those who witness the art.

Access to this power is typically found via Neptune, Pisces or the 12th House, as these symbols indicate a person's sensitivities to the spiritual muse. But equally important is some kind of Saturn, Virgo or 6th House focus, which lends the willingness and discipline to practice and slowly improve technique day to day, to give that spiritual muse something to ground itself through. Otherwise what emerges is diffuse and uninteresting, without definite, cultivated form.

Emily Dickinson had a Libra 12th House ruled by her Sagittarius Venus and a Pisces 5th House ruled by her 3rd House Neptune. This shows a clear openness and ability to channel higher consciousness through poetry that on its own would likely be dainty and diffuse, but her 5th House Mars/Pluto conjunction in Aries anoints her poetry with intense passion and raw human desire. Moreover, her Saturn in Virgo in the 10th House shows great discipline and the ability to intensely focus herself on her creative craft.

The very act of looking at a chart, whether yours or someone else's, as a way to glean the flavor and form of the creative abilities available to that person, is in itself a creative act. We all have the urge to create, and it is noble to see oneself as a vessel for something greater and to seek out the highest potential of expression of that higher power. May you find your muse and may she grace you with creative gifts beyond your imagination.