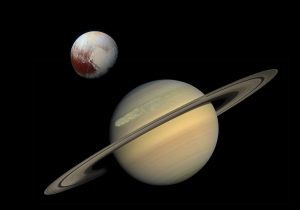 Five hundred years ago, during the year 1518 according to Wikipedia, one of humanity's darkest and cruelest endeavors, the transatlantic slave trade, began. In the United States, slavery was a legal and acceptable practice for roughly 250 years, outlawed now for only 150 years. While we see no legally sanctioned instances of slavery in the US today (or do we?), ongoing problems of racism are still prevalent, as we have hardly erased the stain of slavery's trauma on our nation's consciousness.

Just prior to that time, in November of 1517, the planet Saturn culminated its conjunction with Pluto in Capricorn, a conjunction that would last well into 1519. When we consider the archetypal nature of the relevant symbols — Saturn, Pluto and Capricorn — we can imagine a difficult dynamic of power and control, of superego wrestling with id for domination. Compulsion for order and unbridled passion merge and clash in supreme battle, giving rise to relentless pursuits of power. Saturn and Pluto together represent the lowest, as well as the highest, of possible collective human achievement, positive and negative modes of construction and destruction.

Today, Saturn and Pluto are again conjunct in Capricorn, having taken 500 years to return to the sign they were in when the tragic chapter of modern era slavery began. Using the techniques outlined by Richard Tarnas in his book Cosmos & Psyche (15º orb for outer planet quadrature alignments), the conjunction began in January 2018 and will continue through the end of 2021.

What could this conjunction, along with some other important upcoming astrological aspects, mean for the future of our world? How does it fit into our historical context? Does it portend doom or hope? Moreover, how might we see this transit in the light of our own personal stories and horoscope? This article, broken into four parts, will attempt to address these questions. First, let's take a look at the symbols involved, their meaning and some historical correlations.

Saturn, the planetary ruler of Capricorn, is, like Capricorn, concerned with order and control, authority and discipline. It prizes achievements of goals over the nurturing of feeling, using rule of law to create order out of chaos. Saturn strives to create balance through integrity, but can also become overly concerned with drawing an iron curtain of morality over feared depravity. Without Saturn we would have no hope for security, corrupted Plutonic passions would rule in mob style and there would be no order or structure to anything. That you have access to a device that can present this article to you is due largely to Saturn (with a healthy dose of Mercury). The discipline and organizational control it takes to develop and distribute a highly advanced technological device involves a great degree of Saturnine focus, effort and timing.

By contrast, Pluto rages in the underworld of the soul. It is connected to the deep passions, desires, compulsions and existential needs of the individual self. Uncontrollable urges that overcome us, despite dire warnings from our higher reasoning, show Pluto's chthonic power over us. As the ruler of the underworld, Pluto is the shadow of the psyche, the unconscious desires for power that may actually mask deeper desires for individuation and connection. As Carl Jung taught, it is via the cultivation of our shadow, bringing the light of awareness into our psyche's darkest recesses, that we rise into the fullness of our Self. It is Pluto that prevents us from becoming complete Saturnine automatons, robots in servitude to corporate or political machinations.

When Saturn and Pluto are in conjunction (or any quadrature alignment, for that matter — conjunction, square, opposition), their interactions are very complex. It's not enough to say that Saturnine needs for order are in battle with Plutonic needs for personal power. As Richard Tarnas points out, there is a complex interplay and interpenetration between the two planetary archetypes. Saturn penetrates into Pluto as Pluto penetrates into Saturn. What we can then find during these alignments are expressions of shadow control, authoritative discipline enacted to serve the greed of a few in power. Conversely, we also experience during these times expressions of positive power dynamics sculpted by a highly attuned moral conscience. Often times these forces show up in the form of a battle between dark and light. Which side is dark and which is light comes down to one's relative level of observance. If you are on the ground, in the fight, your side will always be light and the enemy dark. But from a higher point of view, the distinction becomes less personal and more objective.

To illustrate, consider some of the most graphic historical examples of Saturn and Pluto in action. The darkest conflicts of the last hundred years are marked by these planets — World War I, World War II, the Vietnam War, the height of the Cold War, and 9/11 — all occurred during Saturn/Pluto quadrature alignments. In all of these cases you can see in effect a shadow power, whether fascism, terrorism or leaders lying as pretext for war, exercising great discipline in the effort to gain greater domination. But simultaneously you also see a counterforce — Allied powers, public protests, bold journalistic integrity — rising also out of a disciplined effort to act from a moral conscience that is just as passionate as the dark powers they confront.

During the time of slavery it was accepted by many that skin color should dictate one's inferiority or superiority in the eyes of society. There we see a kind of Saturn pretext, that order is maintained by way of a social caste system. But a deeper Pluto dimension is also playing out here. By casting ("caste-ing") others as inferior, it's possible to feel safer and entitled to a sense of power in security, because by projecting natural fears of insecurity (death, loss, pain) into the inferior other, those fears become objectified and therefore controllable. It is of course all a dark illusion, since any willful abuse of others always makes one less secure rather than more. Eventually the abused will fight back. The Civil War, certainly not so civil and without granting any special moral authority to the North, expressed the unavoidable violent result of centuries of profiting from abuse.

Today we see this same dynamic played out in the realm of immigration. The same fears are being projected on immigrants and the same warnings apply. Until we can accept the natural insecurity of life, that our jobs, our bodies, our loved ones and possessions, have zero guarantee of survival day by day, we will be prone to projecting our fears onto those who fit best our inner blame profile. If we want to thrive in a world that does not feed off fear we must take the opposite tack — accept and nurture each other, include everyone, see the commonality of our humanity and stand for the conscience of the heart.

All of this is Saturn/Pluto territory. The ultimate concern represented by these planets is the creation of enduring security and inclusion through deep transformation of the foundations of civilization. The first step is rooting out the fears that drive our darkest natures. Saturn and Pluto help us do just that. Whenever we encounter a Saturn/Pluto existential conflict, the end result is a healthier society, a better world. See postwar prosperity, the creation of the UN and EU, the Civil Rights Act, the end of the Vietnam War and the fall of the Berlin Wall, positive rises in the ever-turning sine wave of human evolution. The planetary aspects that are forming over the coming decades show our current time as no exception to this cyclic rule.

4 Responses to Saturn and Pluto, Part 1