Saturn and Pluto (and Jupiter) Part 3
Posted on May 24 2020 by Brian Allemana
Category Coronavirus Crisis, General Astrology.  |  No Comments  |  Permalink 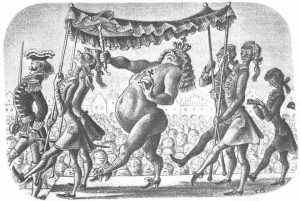 As mentioned in previous articles, we are in the crux of a major dance of planets involving Saturn, Uranus, Pluto, and Jupiter. I covered the conjunction of Saturn and Pluto first, then added the "spice" of Uranian influence in part 2. Now we mix in the mellowing flavors of Jupiter.

At this point in the long line of major planetary aspects for 2020, we are in the midst of a strong degree of retrograde. Multiple simultaneous retrogrades always occur when superior planets are grouped together (superior meaning further from the Sun than Earth), as Jupiter, Saturn and Pluto are today. Whenever the Sun reaches approximately 120º (or trine) from a superior planet, that's when the planet's course reverses, either retrograde or direct again. When many superior planets are near to each other, as we have now with Jupiter, Saturn, and Pluto, then those planets will all go retrograde at roughly the same time (distances from Earth play into the timing).

When so many beyond-Earth planets turn in reverse, we're looking at social and collective psychic forces taking a step back, going underground, hiding from plain sight. It's a time of potential confusion, conflicting reports, and unresolved conflicts. It's also a time of retooling, rebuilding and taking our attentions inward to find new solutions to old, or newly arisen, problems. Themes may recur that we thought were resolved but still need another look. As Laurence Hillman points out, we are deeply in a "yin" time, an inwardly reflective and potentially transformative process. This is especially true during this retrograde season, lasting into the Fall. We should not expect clear movement forward towards resolution of any of our pressing social issues for some time.

When talking about Saturn and Pluto (now at the tail end of their conjunction) I referred to the outright oppression of one class of people by another. War as a result of longstanding power dynamics often break out during Saturn/Pluto alignments. With regard to Saturn and Uranus (now in square aspect, or roughly 90º), we're looking at sudden disruptions to societal structures, typically with regard to ways in which those structures alienate those whom society has deemed unworthy. Now with Jupiter in the mix, we're looking at issues of truth and faith relative to functioning systems — what systems are truly working and what are not? Where are the lies and covered up secrets that prevent a better functioning world? What have we put our faith in that has turned out to be less than our principles can tolerate? Or conversely, in what ways has our faith held up with strength and integrity under the weight of worldwide crises?

Jupiter's movement through this section of late Capricorn is akin to a light shining down the halls and burrows of lawmaking, revealing the backrooms and hidden deals that the public is normally kept unaware of. The proverbial emperor not only has no clothes, but his nakedness is visible to all on Twitter, Facebook and Fox, and the continued attempts to pretend otherwise are not only obviously feeble, but they seem designed for a peculiar kind of optics rather than meant to be believed.

This emperor is not just referring to anyone in particular, but to a larger system of practice and thought, built on a belief that those with means deserve to control the process. This belief not only underlies our corporate-backed politics, but also the celebrity culture that pervades social and other forms of media. It pervades academic institutions and religious groups, and is painted on every billboard we see, sneering down at us to cynically remind us that our material worth is somehow directly correlated to our value as a human being.

Rulership by that thought paradigm is about to change. At the next Winter Solstice, Jupiter and Saturn meet at 0º Aquarius. Through the centuries, Saturn/Jupiter conjunctions at early sign degrees have been connected with empires falling and rising. Again, the "emperor" spoken of here is referring not to a particular person or nation, but to a collective thought paradigm, and there is no guarantee that the new emperor will not be a tyrant. Thus our efforts at cleaning up our individual perspectives is more crucial now that it likely has ever been in our lifetimes.

The squares that are forming this year between Saturn/Jupiter and Uranus warn us to be careful with our collective psychological projections. The work of re-envisioning and rebuilding the world will need to be handled with the utmost focus, concentration and care, lest this vast, raw energy topple the delicate fledgling framework of a new society. We must take seriously the work of personal psychological growth, so that when we point at injustice in the world with one hand, we are equally pointing with the other hand back into our own shadows and pretensions. Sorting out the truth is not a light affair, and no one can grasp it without the hard work of dealing with their own shadow.

As to the coronavirus pandemic, we can easily correlate the retrogrades with large groups of people wanting to "get back to normal". Re-opening states, businesses, parks, and beaches is an attempt to retry what no longer works, which will force a reevaluation and restructuring of how we do things. This Summer and Fall we will see Saturn moving back through the degrees that it did during the opening of the pandemic, still in the early square to Uranus, suggesting multiple waves of infections to come. With Jupiter close by, these subsequent waves will hopefully not be as bad as the first. With Pluto in the mix, we might expect unpleasant new truths about our country's infrastructure to be revealed, requiring deep transformations if we are to survive.

For years astrologers have been pointing to this time as a major shift for the systems that run our world. Now that we're here, we're all suffering the consequences of a dying consciousness. We are all in this grief together. Hope you're hanging in there okay.