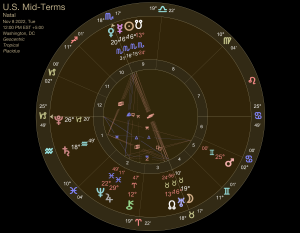 Chart for the U.S. Mid-Term Elections

It's not surprising that the astrology for the US mid-term elections looks like a mess. Put less bluntly, the chart reflects an extremely tense moment that is going to permanently alter the course of events going forward. Featuring a Taurus Lunar Eclipse at square to Saturn and conjunct Uranus, the chart evokes a demand for change that will break and leave behind what we thought we knew about our place in the world and what our future might hold.

As dire as that sounds, it is not a prediction of doom. As always, eclipse charts represent an era, or a phase, a period of time that has been gradually building up to a moment of consciousness, where we finally realize some truth we can no longer ignore. There's no going back because, despite what we see in the world, the human soul abhors regression.

Correlated with the intense political polarization in the US today, as well as with events like the Covid pandemic and the January 6th insurrection, is the Saturn/Uranus square that began in 2020. I've written about this square before. It is associated with rebellions, failed incursions, and massive economic contractions. Despite how dire the crisis appears, it seems that, from a US perspective, whatever is novel and rebellious during a Saturn/Uranus square ends up failing to subsume democracy into its fold.

There are historical and astrological reasons for this. The prime astrological point is that, in the natal chart for the United States, Saturn and Uranus are in a harmonious trine aspect, with Saturn in exaltation. We are not destined for political failure but for eventual political integration. A functional democracy requires occasional crises that breakdown dysfunctional elements, making space to recreate itself based on what works. We see this breakdown/rebuild cycle occur with surprising consistency in coincidence with Saturn/Uranus transits. This particular square, lasting for only another few months, is no exception.

This final phase of the square just misses becoming exact. Saturn is just a degree or so short of exact 90º alignment with Uranus. This is akin to tension that is building and building, but cannot be released and thus deflates. The implication is that the energy that is increasing — the energy of reactionary, extreme political and social views — will fall flat, gaining no traction.

The Saturn/Uranus square seems to have given momentum to reactionary forces that refuse to give up on an increasingly unacceptable way of life. The entire world is embroiled in the rage of this square, and we are seeing it fail quite astoundingly, such as in Russia, Britain, and Brazil. Still, the right-wing rage is clamoring to grab all the power it can, and it is easy to see it would leave all of us under the thumb of tyranny, subjects to madmen and madwomen who have lost their souls to false promises of power and a future that will never come.

So what happened to the progressive energy of 2020? It may yet be readying for a stunning return in the second half of the decade. After the Saturn/Uranus square ends in 2023, there's a bit of a pause, a stretch as we reclaim our bearings, before the Uranus/Pluto trine of 2024-2030. Coming just after a Jupiter/Uranus conjunction and coinciding with a complex of Saturn/Neptune sextile Uranus and Pluto, this combo of aspects gives our Promethean impulses quite the boost. Said another way, a rebound of progressive, socially positive, and liberating energy is headed our way.

I have long doubted that the current wave of right-wing extremism is going to succeed in its ultimate political ambitions. I generally shy away from making hard predictions, but given the astrological picture of the coming years, it's hard to imagine, for example, Trump becoming president again, or the country becoming hijacked through political fraud exerted by extreme Republicans.

What is most intriguing about the upcoming few years is the Uranus/Pluto trine lasting from 2024-2030. Looking back in history we can consistently observe great expansions of movement and cultural renaissance while Uranus and Pluto are trine. For example, just after the Civil War — itself fought during a Saturn/Uranus square, ending with the following Saturn/Uranus trine — the country's transcontinental railroad system was built. For the first time in history, people could travel from East Coast to West Coast in a matter of days. Railroad tracks connected people like never before, and led to the prosperity of the Gilded Age; although the following Saturn/Uranus square, just as today, corresponds with the great disparities in wealth that also defined that Age.

During the prior Uranus/Pluto trine, in the 1750s, the steam engine had revolutionized cargo and personal travel in a similar way to railroads. Looking ahead after the Gilded Age to the next Uranus/Pluto trine, during the 1920s, we had the "Roaring 20s", and once again a relatively new invention, the internal combustion automobile, was revolutionizing travel and the economy. It was also a period of cultural renaissance, with Jazz and various cultural revolutions defining the times, until the Saturn/Uranus/Pluto T-square of 1929 kicked off the Great Depression.

What could be the new technological invention that revolutionizes travel in the late 2020s? Could it be electric vehicles, or perhaps a new form of sustainable energy? Furthermore, what sort of cultural renaissance might we see? Could a renewed spirit of Liberté, égalité, fraternité sweep over the land? That might be waxing a bit too romantic, but it certainly looks like the latter half of the 2020s will look much, much different from the early part of the decade.

My most sincere hope is that what is elucidated by the stars is enough to stoke hope and optimism in all of us. It takes only a surface look to see that history is made in great cycles of creation and destruction. We have absolutely no reason to assume that today's crises are any different. What is broken down today becomes a source of renewal tomorrow. Of that we can always be certain.

8 Responses to Wrapping up 2022: The Pressure Before Relief