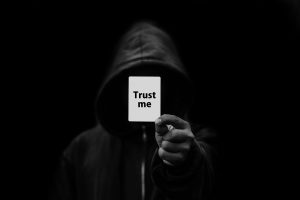 One of Carl Jung's great contributions to the understanding of the human psyche is the nature of psychological shadow. For every constructive "sunlit" part of our psyche — qualities such as kindness, generosity, discipline, and achievement — there will always be an equally destructive, or shadow, part. You may give a stellar performance of creative genius, then walk offstage and feel crushed by loneliness. You may go to temple to pray and offer alms to the poor, then later shout angrily at the waiter who takes too long to serve you. You may rise in your career as an exemplar of your field, all the while neglecting family and emotional depth. No matter how "good" we try to live our lives, an equal shadow part will stalk us and appear in our abusive thoughts and actions, depressed emotions, chronic health problems, crippling nightmares, and unconsciously created accidents. The seesaw of good and bad, civilized and uncivilized, light and shadow, is always and inexorably seeking balance.

As Jungian analyst and writer Robert Johnson points out, we are always whole, whether we want it or not, whether we see it or not. Our choice is to either consciously and creatively engage our shadow through ritual and play, or allow our shadow to play us.

It's not that the shadow is some kind of scary antagonist that we have to be guarded against, but that it is us and is "shadow" merely because we are choosing to mask it, to relegate our uncivilized qualities to an unacknowledged psyche-closet, where they fester as our secret shame, guilt, and victimization. Healing occurs when we choose to open those closet doors, engage with those cut-off parts of ourselves, and learn to embrace and even dance with them. What we ultimately find is that our shadow is full of riches and vitality, that it is not "evil" but it is "dark", meaning mysterious, magical, intuitive and deeply nurturing.

Astrologers link Pluto with Jung's concept of shadow, referring to the deep passions and existential urges and fears that drive us from the level of Freud's "id". Pluto is also connected to a deep transformation that occurs when we have no choice but to face these untamed powers, realizing that our small, rational, separated ego mind is no match for the seismic flows of the oceanic, non-rational, and ultimately unifying powers of the deep psyche.

Today the world is wrestling with its collective shadow. This is particularly true for the United States, now in its Pluto Return. For all the good that America has done and created, it has always maintained a largely unacknowledged shadow, expressed in systemic racism, burglary of foreign resources, and terrorism against countries far poorer than itself. The US has proved itself as both a great defender of human rights and one of its worst abusers. As it has raced to become the richest country in the world it has imprisoned many of its poorest people in a deliberate system of mass incarceration. America is a showcase of extreme polarization and the tension has become untenable.

Before any healing can be achieved, it is necessary that the collective shadow of the United States be acknowledged and addressed. To do this will take an immense national humility. Just as some European countries were once brought to their knees by authoritarian leaders, the US is now in a similar, though I would argue not quite as dire, phase of development. The deeply buried, unacknowledged shadow of America is rising from the soil, full of anger and destructive power, an awakened national id just beginning to tear down the national ego with a power we cannot possibly fight.

This critical juncture is clearly shown in our current astrological lineup. In particular, Saturn and Pluto, which are reaching the end of their conjunction that started in mid 2019, reflect the need for a total reformation of our societal structures by facing our society's worst demons. Jupiter's conjunction to Pluto (occurring now through November) adds an important ingredient: A healthy dose of wisdom, inherited by generations of struggle, to apply to our current challenges.

This includes the recognition that it is patently impossible for any one person to claim pure righteousness. Indeed, the evil we blame on others must reflect an unacknowledged evil in ourselves. To even judge another person as evil is, at minimum, to commit evil in our own thoughts. But it is also not enough to try and control every thought and action in a panicked effort to avoid evil. That only leads to victimization, which will necessarily cycle us back to hateful resentment.

We are left with the only effective option: We must attend to our individual and collective shadow work. While Saturn has been forcing us to face and wrestle with the devils in our shadow closets, Jupiter gives us the power to hold open our arms and embrace the pain of the victim with the shame of the abuser, realizing that we are they and they are we. This recognition of shadow in ourselves dissolves fear and hate in a flash.

This is the promise of our future if we embrace the work at hand today. Future astrological transits show a cultural awakening like we have never seen, but this can still be squandered if we fail to step up to the reality of our ultimate interconnectedness and nature as Soul. The best thing we can each do is to work on ourselves as the collective must work: Embrace the disowned byproducts of our own choices, let the losses, the griefs, the failures, the abuses (done to and by us), the shame, and the resentments flow into and through our consciousness with a strength of presence that needs only to bear witness. We thus unblock the flow of life deep in our being, opening our hearts to a greater vitality and connection than we could otherwise know. This work may be difficult, but the reward is worth far more than the effort.